Notice: Welcome to our university.

A change in your life IELTS cue card 2017 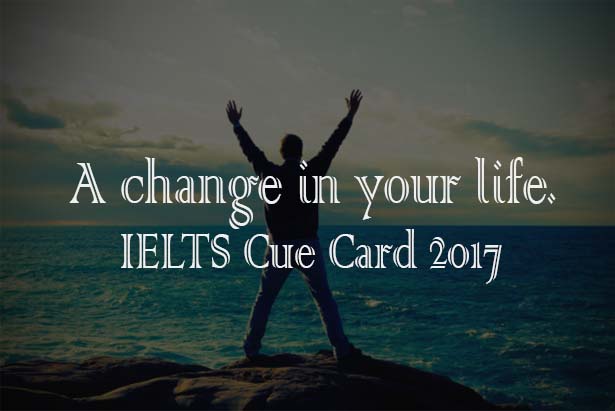 I read in Paulo Cohelo’s ‘The Alchemist’, “When someone makes a decision, he is really diving into a strong current that will carry him to places he has never dreamed of.” During my first perusal of this line, the full realisation of the meaning evaded me but now that it has been six months since I made a crucial decision, the meaning of the sentence is beginning to dawn on me. The decision I made six months ago was to live and work in my hometown, which is a nondescript rural town where past masquerades as future and present is shrouded in oblivion. Before i started living in my hometown I had an illusion that I could control everything around me. In short I was a real control freak. But in my hometown I realised that nothing is in my hand, not even my own two hands! I was determined to reach work in time but on my way to work my bike stalled and refused to start again. I had to call a lorry and send it to a nearby garage. Worse than this, as there was no rickshaw around I had to walk a long distance to my work and it was raining cats and dogs. And finally when i reached the college where I teach, I looked unkempt and very grungy. Earlier even a single mistake committed by my students or an innocuous comment passed by them drove me mad. But here students seem to be making no efforts to learn and social etiquette is utterly alien to these innocent creatures. Initially I was extremely repelled by the unabashed rusticity displayed by the students here. But then I thought c’est la vie i.e. that is life. Man proposes and god disposes. It is really commendable that my perspective to life has gone through a sea-change. Earlier, I lived as if I were the centre of the universe but now I have realised that I am just a small ripple rising on the ocean of this existence. Earlier, I held somebody else responsible for my happiness or sadness but now I find myself responsible for what I am. This change has been caused by my disposition to ruminate about myself and the things around me.

perusal : the action of reading or examining something.
evaded : escape or avoid (someone or something), especially by guile or trickery.
crucial  : decisive or critical, especially in the success or failure of something.
dawn    : become evident to the mind; be perceived or understood
nondescript: a nondescript person or thing
masquerades : a false show or pretence. OR pretend to be someone one is not.
oblivion : the state of being unaware or unconscious of what is happening around one.
shrouded: cover or envelop so as to conceal from view. OR wrap or dress (a body) in a                         shroud for burial.
illusion : an instance of a wrong or misinterpreted perception of a sensory experience.
stalled: stop or cause to stop making progress.
innocuous: not harmful or offensive.
etiquette: the customary code of polite behaviour in society or among members of a                             particular profession or group.
unabashed: not embarrassed, disconcerted, or ashamed.
commendable: deserving praise.
ripple : a small wave or series of waves on the surface of water, especially as caused by a slight breeze or an object dropping into it